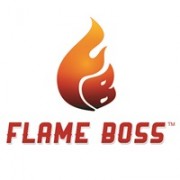 Collins said sales of the Flame Boss 100 were good since starting last year, he sold them for $289 to pool and patio stores and through hundreds of authorized dealers reps of merchants as far away as Sweden and Australia.

But now, Collins explained that his Flame Boss 200 model, which allows you to control the BBQ smoker and its temperature from work or the golf course with a smart phone or iPad, has been selling for $349 at the rate of 8 or 9 to every one of the Flame Boss 100 packages sold.

Both Fame Boss 100 and Flame Boss 200 are sold at authorized hardware stores, pool and patio stores and outdoor kitchen stores nationwide in packages of two varieties – “Kamado” for a ceramic BBQ smoker and the other labeled “Universal” for all traditional style smokers.   Visit www.FlameBoss.com.

Flame Boss™ is a client company of the University of Central Florida Business Incubation Program in Apopka.

With seven facilities throughout the region, the UCF Business Incubation Program is an economic development partnership between the University of Central Florida, the Corridor, Orange, Osceola, Seminole and Volusia Counties, and the cities of Apopka, Kissimmee, Orlando and Winter Springs.  Participating companies sustain more than 3,600 local jobs and have had a total impact of $1.51 Billion on regional sales and $2.48 Billion on regional economic output.  During the last fiscal year, the program has returned $7.95 for every $1.00 invested in the program.