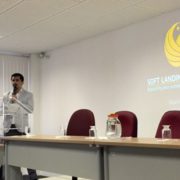 ORLANDO, Fla. – A key staffer of UCF’s Business Incubation Program (UCFBIP) recently addressed an entrepreneurship conference at the Digital Metropolis Institute (IMD) at the Federal University of Rio Grande Do Norte–(UFRN) in Natal, Brazil to promote UCFBIP’s Soft Landing Program. The program helps international and domestic companies headquartered outside the region, expand to the U.S. market and establish a presence in Central Florida.

The event entitled Encontro de Atividades Empreendedoras da-UFRN (Gathering of Entrepreneurial activities at UFRN) was attended by an A-list of nearly 200 involved in entrepreneurship, including researchers, professors, business leaders, representatives from SEBRAE–similar to the SBA in the U.S.–site managers and over 40 business owner-members of the Brazilian university’s business incubator. The event promoted entrepreneurship, best practices and exchange of experiences amongst UFRN’s entrepreneurial ecosystem and Brazil’s North-Eastern region.

Ricardo Garcia, Government Resources Manager for the UCFBIP, was invited by UFRN to present the UCFBIP’s Soft Landing Program. The suite of resources provided by the program are designed to help expanding firms transition to new business environments by helping them quickly adapt and connect to the Central Florida business community while reducing risks and cost involved with testing and operating in a new market.

The Soft Landing program, now in its fifth year, is currently supporting 25 international and national companies who’ve established Orlando operations with about 25 percent of them headquartered in Brazil.

Garcia explained to the group how flexible, short-term office space, business contacts, market research and meeting government regulations are among many services the Soft Landing program provides. The goal is basically to reduce barriers for companies unfamiliar with how to conduct business in the U.S. while providing them with access to an educated and enthusiastic workforce and creating jobs in Central Florida.

With seven facilities throughout the region, the UCF Business Incubation Program is an economic development partnership between the University of Central Florida, the Corridor, Orange, Osceola, Seminole and Volusia Counties, and the cities of Apopka, Kissimmee, Orlando and Winter Springs.  Participating companies sustain more than 3,600 local jobs and have had a total impact of $1.51B on regional sales and $2.48B on regional economic output.  During the last fiscal year, the program has returned $7.95 for every $1.00 invested in the program.   For more information, visit www.incubator.ucf.edu.