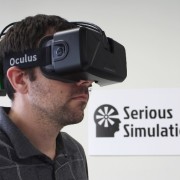 The Oculus development kit, released only in a wired configuration, is currently being used by an estimated 140,000 developers for virtual reality entertainment and simulation applications, Chambers said.

Serious Simulations’ Reformatter is a device that adapts a computer video output into a wireless feed for a variety of wired head mounted displays, and eliminates the substantial frame rotation latency that is induced by other wireless methods, Chambers explained.

The Reformatter overcomes longstanding limitations associated with attempts at untethering virtual reality experiences, and Chambers stressed that the Reformatter totally eliminates the long latency video frame buffering technique that has been standard in the past.

Chambers added that the Reformatter device delivers video frames to the screen in approximately 17 micro-seconds which is 1000 times faster than standard frame buffering.

“Without the hassle of wire tethers, users can experience 3D virtual worlds with unencumbered freedom of movement,” said Chambers.

The first Reformatters were just recently offered for sale at www.serioussimulations.com and have garnered tremendous interest from the VR community.

Serious Simulations is a client company of the UCF Business Incubation Program located in the Central Florida Research Park in East Orange County.

About the University of Central Florida Business Incubation Program

With seven facilities throughout the region, the UCF Business Incubation Program is an economic development partnership between the University of Central Florida, the Corridor, Orange, Osceola, Seminole and Volusia Counties, and the cities of Apopka, Kissimmee, Orlando and Winter Springs.  Participating companies sustain more than 3,600 local jobs and have had a total impact of $1.51B on regional sales and $2.48B on regional economic output. During the last fiscal year, the program has returned $7.95 for every $1 invested in the program. For more information, visit www.incubator.ucf.edu.