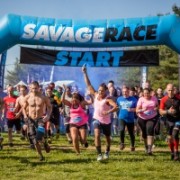 ORLANDO, Fla. (Sept. 3, 2015) — Savage Race, a young Orlando-based obstacle course race company featuring the world’s best obstacles, has received dual honors by being named one of the fastest-growing private companies in America and one of the top 50 Florida companies to watch.

Inc. Magazine ranked Savage Race 266th in its September 2015 edition of 5,000 Fastest-Growing Private Companies in America, and GrowFL – a statewide economic-development program – named Savage Race as one of Florida’s 50 Companies to Watch.

Founded by Sam Abbitt and Lloyd Parker in 2011, Savage Race is a business client of the University of Central Florida Business Incubator Program in Orlando. The company combines Abbitt’s master’s degrees in both business and construction with his interest in obstacle racing, fitness and endurance sports to provide challenging obstacle courses that test participants’ courage and teamwork. With 22 employees, the company hosts more than a dozen such events in the U.S. each year.

“It’s an honor to be recognized by both Inc. Magazine and GrowFL for our innovation and growth,” said Abbitt. “We’re pushing the boundaries of the obstacle course racing industry every day and the world-class team behind me at Savage Race is what makes that possible. We’ve quietly worked to establish ourselves as a leader in our industry, and to be recognized on both a national level and a local level within the span of just a few weeks is incredible. We’re proud to do what we do every day and are very excited about the future of Savage Race.”

A New York-based business magazine, Inc. annually publishes a list of the top 5,000 fastest-growing private U.S. companies based on growth and wealth. Orlando’s Savage Race had a whopping three-year growth rate of 1,709 percent and revenue of $3.8 million in 2014.

GrowFL on Wednesday, Sept. 2, identified Savage Race as a Florida second-stage company to watch. A second-stage company, which falls somewhere between a startup company and a large firm, is one that is “poised for growth.”  GrowFL’s nationally-certified experts assist second-stage growth companies by providing strategies, resources and support to help them reach the next level, while strengthening the local economy.

“Much like crossing a Savage Race finish line, there is a sense of pride and triumph to see Sam [Abbitt] and his team reach this point after overcoming some challenging obstacles,” said Michael Weiss, site manager of the UCF Business Incubator–Orlando. “We have really enjoyed working with the Savage Race team, and it is extremely rewarding to see their growth and success recognized on a local and national level.”

About Savage Race
Savage Race, an Orlando, FL based premier obstacle course race featuring the world’s best obstacles, hosts more than a dozen events across the middle and eastern United States each year. Savage Race is a true test of courage and teamwork as over 100,000 attendees annually push themselves to their limits to defeat over 25 jaw-dropping obstacles forged with 65 tons of steel and drenched in 1.5 million gallons of water and 60,000 pounds of ice. Savage Race participants across the country train hard to complete the 5-7 mile race that tests stamina, strength, agility, and mental grit, culminating in victory stories and muddy hugs passed around amongst strangers and friends alike. To learn more about Savage Race, please visitwww.savagerace.com.

With seven facilities throughout the region, the UCF Business Incubation Program is an economic development partnership between the University of Central Florida, the Corridor, Orange, Osceola, Seminole and Volusia Counties, and the cities of Apopka, Kissimmee, Orlando and Winter Springs.  Participating companies sustain more than 3,600 local jobs and have had a total impact of $1.51 Billion on regional sales and $2.48 Billion on regional economic output.  During the last fiscal year, the program has returned $7.95 for every $1.00 invested in the program.