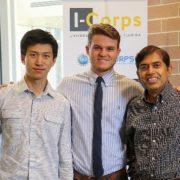 Orlando, Fla.  – For nearly 200 years, copper has been the metal of choice to transmit electrical currents and currently millions of miles of copper wire is used for electrical transmission.

Now, Orlando-based Capacitech Energy and the University of Central Florida’s NanoScience Technology Center have been tasked to develop a capacitor on the surface of a copper wire which could store electricity in addition to transmitting it.

The two organizations have been granted a Small Business Technology Transfer (STTR) Phase 1 grant valued at $225,000 by the National Science Foundation (NSF).

“This is a major inflection point for Capacitech Energy as we move from a strategic planning stage to a stage of tangible execution,” says Joe Sleppy, CEO, Capacitech Energy. “It not only mitigates risks for stakeholders and accelerates our time to market, but also deepens our connection to UCF and the Central Florida community.”

The STTR funding will be used to develop an on-site, easily customizable cable-based-capacitor to help electronics manufacturers reduce costs by mimicking and replacing a variety of capacitors used in circuits.

Mimicking and replacing capacitors in circuits is only an initial application of this cable-capacitor technology. By expanding copper wire to store electricity, not just transmitting it, the applications can be endless.

For instance, the new method could be used in the fabric of a soldier’s uniform, replacing the heavy batteries soldiers must carry today. It could greatly increase the battery life on electric cars and help store renewable energy, like solar and wind power.

“With the help of this award we are moving towards the goal of making a manufacture-friendly capacitor cables,” says Dr. Jayan Thomas, an associate professor at the NanoScience Technology Center, inventor of the technology and a co-founder of Capacitech Energy.

The grant also allows for four or more new jobs to be created, including a scientist/researcher, a lead researcher and multiple laboratory assistants.

Capacitech Energy was formed to further develop the Cable-capacitor and take it to market. That technology was developed at the University of Central Florida (UCF) in 2014.  Capacitech holds an exclusive license from UCF to the technology.

“Our researchers at the University of Central Florida are solving tomorrow’s problems, today,” says Dr. Tom O’Neal, Associate Vice President for Commercialization at UCF. “This is just one of the many types of new technologies developed at UCF which have tremendous impacts on our future in commercial applications.”

About Capacitech Energy: Capacitech is bringing a new type of capacitor to market. This capacitor, unlike traditional capacitors, is built on the surface of a copper wire. Its performance is proportional to the length of wire the capacitor is built on. This essentially allows our customers to easily customize the performance (capacitance) of our capacitor by cutting the wire at different lengths. For electronics manufacturing companies, this cable-capacitor technology could significantly reduce costs associated to the logistics/inventory related to ordering, inspecting, and managing capacitors. For more information, visit capacitechenergy.com

With seven facilities throughout the region, the UCF Business Incubation Program is an economic development partnership between the University of Central Florida, the Corridor, Orange, Osceola, Seminole and Volusia counties, and the cities of Apopka, Kissimmee, Orlando and Winter Springs.  For the 2014/15 and 2015/16 fiscal years, the activities of these participating firms have helped sustain more than 4,710 local jobs and have had a cumulative impact of more than $725 million on regional GDP and more than $1.3 billion on regional sales. During the same period, the program has returned $7.41 for every $1 invested in the program. For more information, visit www.incubator.ucf.edu.