Orlando, Florida (July 4, 2022)–  Orlando-based Serious Simulations has been awarded a prime contract for prototyping high technology simulated hand grenades, mines, and other devices under the U.S. Army Synthetic Training Environment program, Live Training Systems (STE LTS Tier 2). The Veteran Owned Small Business operating in Orlando Florida was the only small business to be awarded an Army contract in this program.

Under STE LTS the Army intends to introduce many new or updated training systems to enable better live training with the full spectrum of combat weapons. Amongst the live training needs, the Army identified “thrown, placed, and dropped objects” as being required to fill long standing gaps in live force-on-force training.

Thrown objects such as M67 Fragmentation hand grenades have not been exercised in live training. Instead, training with grenades has been limited to live fire grenade ranges, and practice grenade ranges. Using grenades in live force-on-force training has been historically impractical.

In 2018, the team of veterans and engineers at Serious Simulations recognized the need for a realistic hand grenade solution for live force on force training and started to design a very “smart” simulated hand grenade. By 2019, the company had accomplished its objectives and applied for a patent on their innovative technology.

The resulting simulated hand thrown grenade can be employed normally, and it determines its exact proximity to human targets within its realistic munition blast radius upon simulated detonation. The proximity distance determines the wound or kill status of the soldiers participating in the training exercise which enables instant feedback to the soldier and the exercise controllers.

The company’s simulated hand grenades have a protective padding that enables them to be thrown safely in live force on force engagements such as those that take place at the Combat Training Centers throughout the Army. The grenade interface uses the same components as the real grenade for perfect realism.

Other “thrown, placed and dropped objects” for live training can be modelled using the company’s patent-pending proximity technology to include fixed-place and scatterable mines, IEDs, and Claymore type mines. 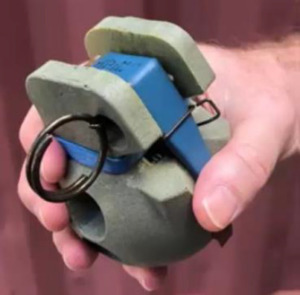 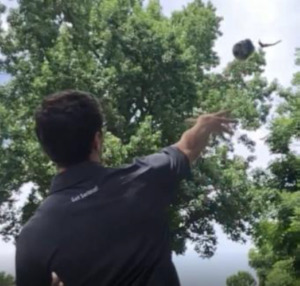 The M67 Frag Sim Grenade (left photo) has all the real components that a soldier interfaces with – Pull Pin, Spoon, & Safety Clip.      An employee throws the Sim Grenade and the spoon fly-off is visible (right photo) indicating that the fuse has begun its 5 second delay.

“We are extremely excited and proud to have been awarded this important contract”, said Chris Chambers, a veteran and founder of Serious Simulations. “We developed a unique and innovative technology to fill key training gaps that exist in current live training, for grenades, mines, and IEDs. We look forward to the iterative and collaborative process of prototyping in this contract which incorporates direct feedback from real soldiers.”

“This contract is also a recognition that Serious Simulations is a small business with a lot to offer the warfighter,” he added. “We plan to exceed the expectations of the Army and provide superb simulator products, ready for production and fielding in a very short timeframe.”

The announcement can be viewed at this link: TReX – STE LTS Tier 2 – NSTXL

Orlando startup Globalfy to double in size as it aids international biz owners...
Scroll to top