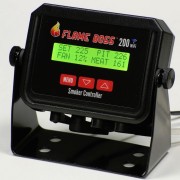 Flame Boss launches a Wi-Fi enabled new product that provides peace of mind and precision to the barbecue smoker experience.

Although smoking and grilling meat may seem like a straightforward, uncomplicated affair, it is often a time-consuming, hands-on effort. The process, however, has recently become much smarter, precise and efficient thanks to a client company of the UCF Business Incubation Program (UCFBIP). In fact, an audience at the recent Hearth, Patio & Barbecue Expo (HPBExpo) in Nashville, Tennessee, enjoyed a firsthand look at the smart temperature control product developed by Apopka-based company Flame Boss, which is making the smoking process easier for professional and weekend pitmasters.

During the HPBExpo event, the company unveiled Flame Boss 200, its second-generation, Wi-Fi enabled barbecue/smoker temperature controller. The new product allows pitmasters to monitor and control the temperature of the meat, and the temperature and flame intensity inside the smoker unit. Because the modular device uses Wi-Fi, the monitoring and control function can be conducted from a smart mobile device.

“Flame Boss 200 provides freedom and peace of mind to the pitmaster, without compromising control, monitoring and oversight,” says Michael Collins, founder and CEO of Flame Boss. “A typical smoking process is 12 to 15 hours and can be a physical and mental drain on the pitmaster as he or she continually monitors the overall smoking process while making the appropriate smoker draft adjustments. We make this process much easier and precise for the pitmaster.”

Collins says the company already has 200 orders for the product, which is compatible with most common smoker units, including the popular Big Green Egg smoker.

Flame Boss 200 addresses a problem inherent in the smoking process — its long duration. Smoking is a drawn-out undertaking that requires constant checking and temperature regulation. That process is simple with the Flame Boss 200, a smart device the size of a cell phone that is connected to probes in the meat. The device is also connected to a modular, variable-speed fan unit on the smoker unit that controls the flame intensity and heat. All of this makes for a predictable, easy-to-monitor operation.

“Nobody wants to get up in the middle of the night to check on the meat,” Collins says. “With the Flame Boss 200, the process is fully automated: plug it in and forget it. Monitoring requires nothing more than a glance at a hand-held device.”

The Flame Boss 200 is the result of extensive planning, testing and marketing, with support during the past year from the UCF Business Incubator – Apopka. According to Collins, the UCFBIP’s educational programs, workshops and classes have been a considerable benefit to his company. “The coaching we’ve received has been invaluable, along with all the collaboration we’ve had with the other client companies,” Collins says.

UCFBIP team members have helped the Flame Boss team craft a strategy for targeting its customers, especially in the wholesaler sector, which is a key market for the company.

“We obtained some of the most helpful information through classes on how to use social media,” Collins adds. “It’s been highly practical and effective. Our relationship with the [UCFBIP] has provided us an edge as we bring these products to market.”

Researchers Use Gold Particles to Detect Cancer; Set to Present at Global C...

Datanautix Helps Businesses Know and Understand What Their Customers Really...
Scroll to top